The new HomeKit-enabled August Wi-Fi Smart Lock is a reliable and secure way to protect your home and fixes near all of the grievances from previous designs.

We’ve used August locks for years with it being one of the very first to support Apple’s HomeKit, but they always had minor annoyances that irked us. With the new 2020 August Wi-Fi Smart Lock, it seems August has listened to its customers.

Over the years as we’ve reviewed the previous generations of August — all of which have largely looked identical — we’ve heard three criticisms. First, is that the lock itself is too large. Second, users hate to use the Connect bridge. And three, that it isn’t that intuitive. 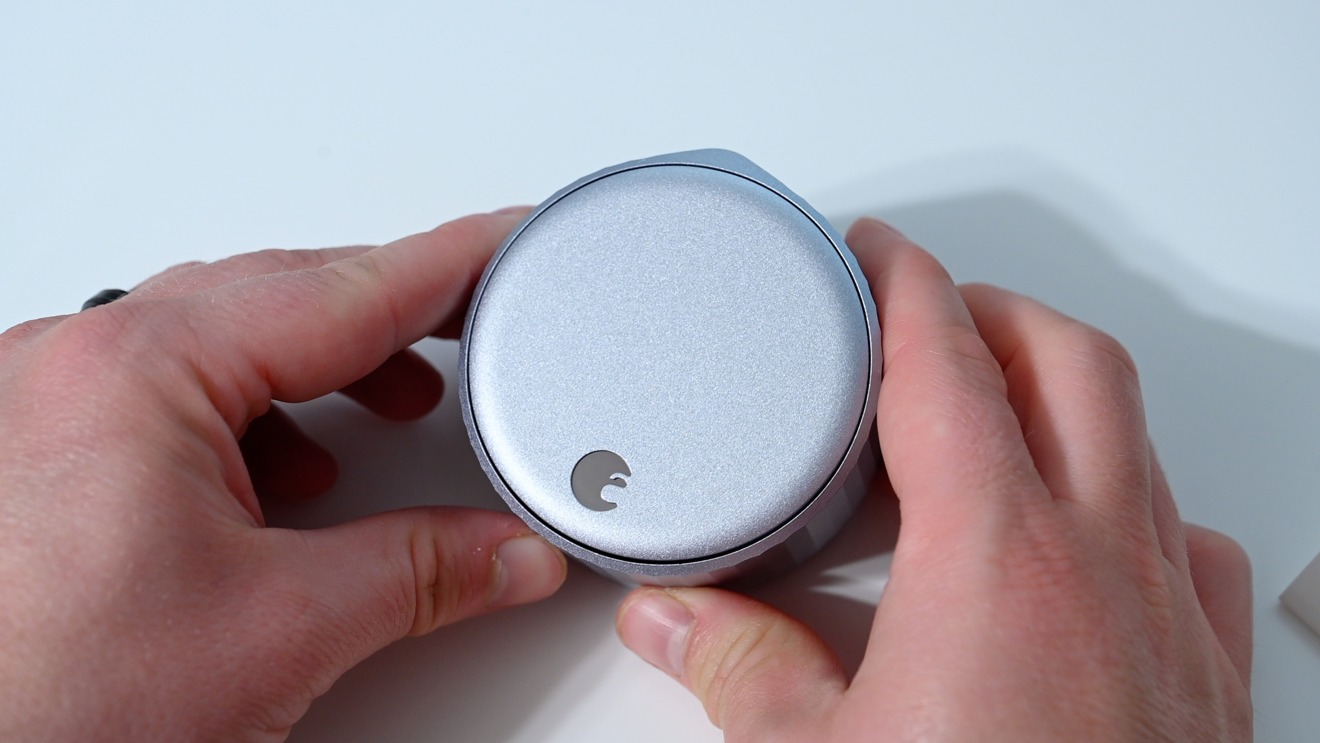 The last one is a hard pill to swallow but one we’ve heard from users in our own homes. Some people don’t realize that this large cylinder is the lock and they have to twist it to unlock the deadbolt. Fortunately, all of these are resolved with the August Wi-Fi Smart Lock.

August was able to shrink the size considerably, and purposefully made it about the same size as a standard doorknob. August says it “screams turn me” when users encounter it, making it much more intuitive. 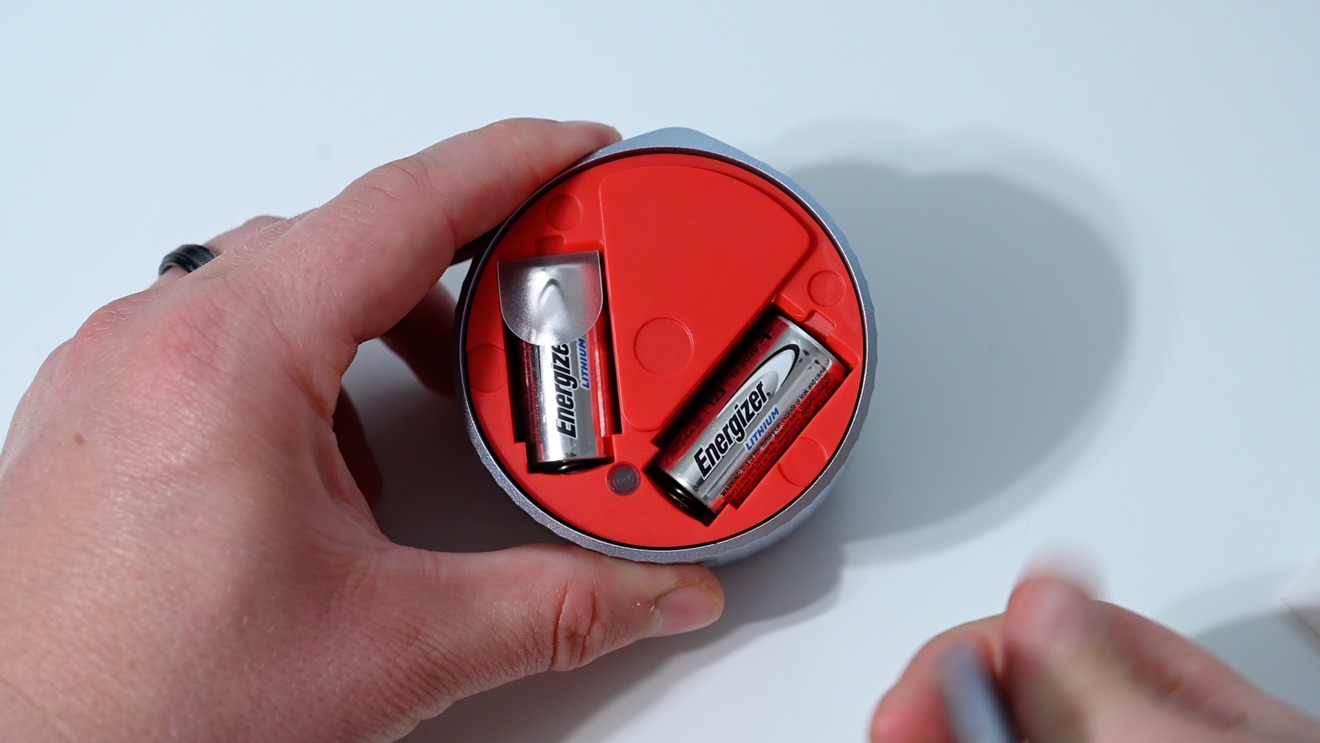 The knob still follows a similar design before, of a round cylinder that sits near flush to the door. The front of the lock has a metal plate that can be removed when the August “a” logo is depressed.

That “a” is also where the status light shines through. Green as it unlocks and red as it locks — same colors as displayed within the August app.

Tucked away behind that plate is a pair of CR123 batteries used to power the lock, which easily come out when they need changing, with the app alerting you when that time comes. The only issue with these is that they are less prevalent than a common AA battery, so we recommend keeping a backup set on-hand for when the batteries inevitably do run dry.

Installing August Wi-Fi Smart Lock is simple, taking us about 5-7 minutes and needing nothing but a screwdriver. 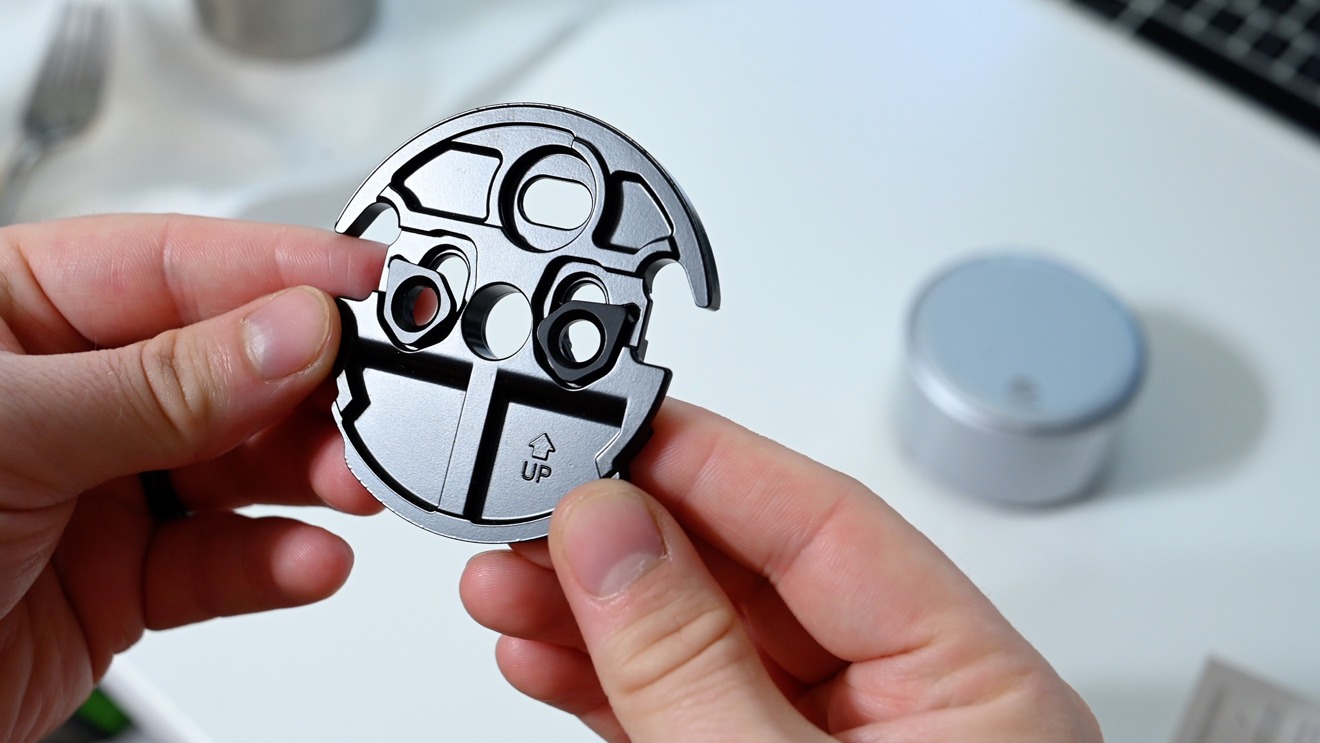 To install August, you tape the front of the deadbolt in place, remove the interior throw, screw down the mounting plate using the lock’s original screws, place the correct adapter in the center, and then secure the August via its wings. 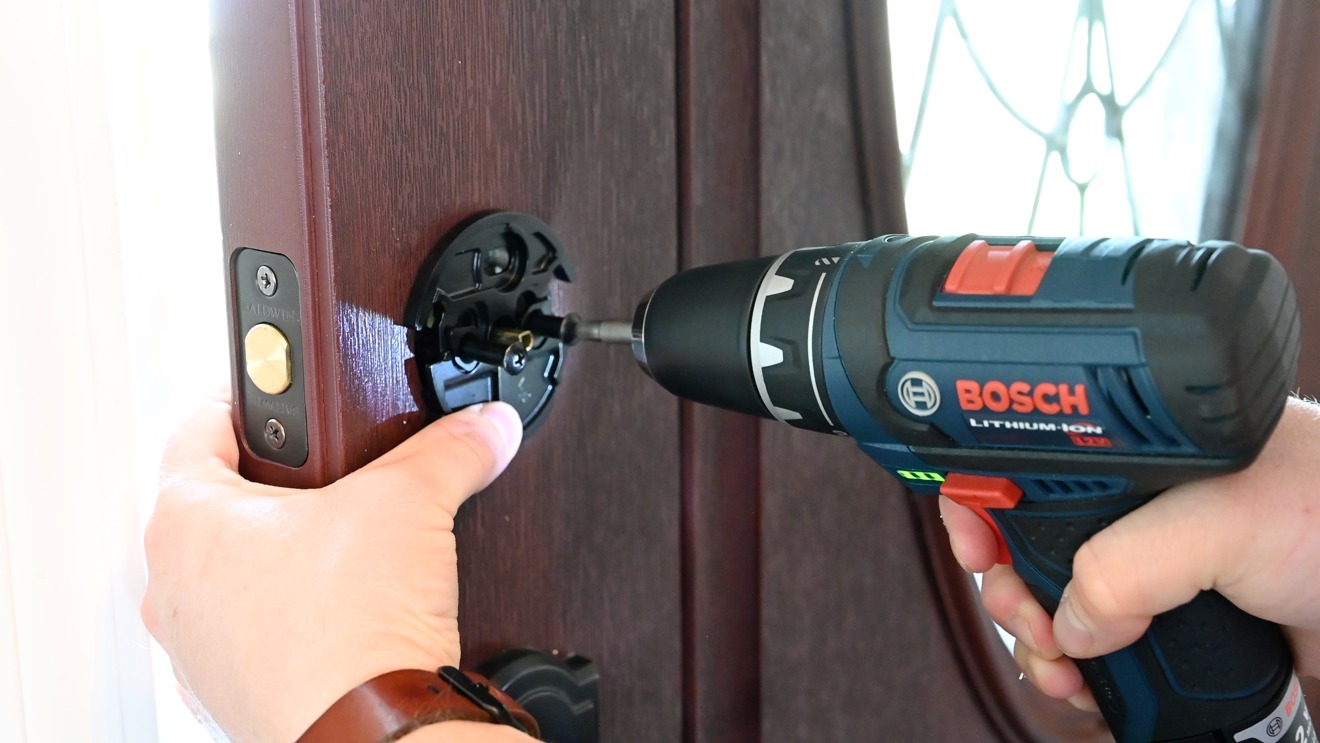 It was easy to install August with a screwdriver or drill

It was easy and quick and still lets you keep the existing hardware on the outside of the door, which means you can continue to use your existing keys as well if you so choose. If you use your keys, the August lock will work just as it always has, but you can at least receive notifications when it is locked or unlocked.

As the new model is so much smaller, an optional cover place is also included. Some doors may have a hole larger than the new August this plate hides that from view. 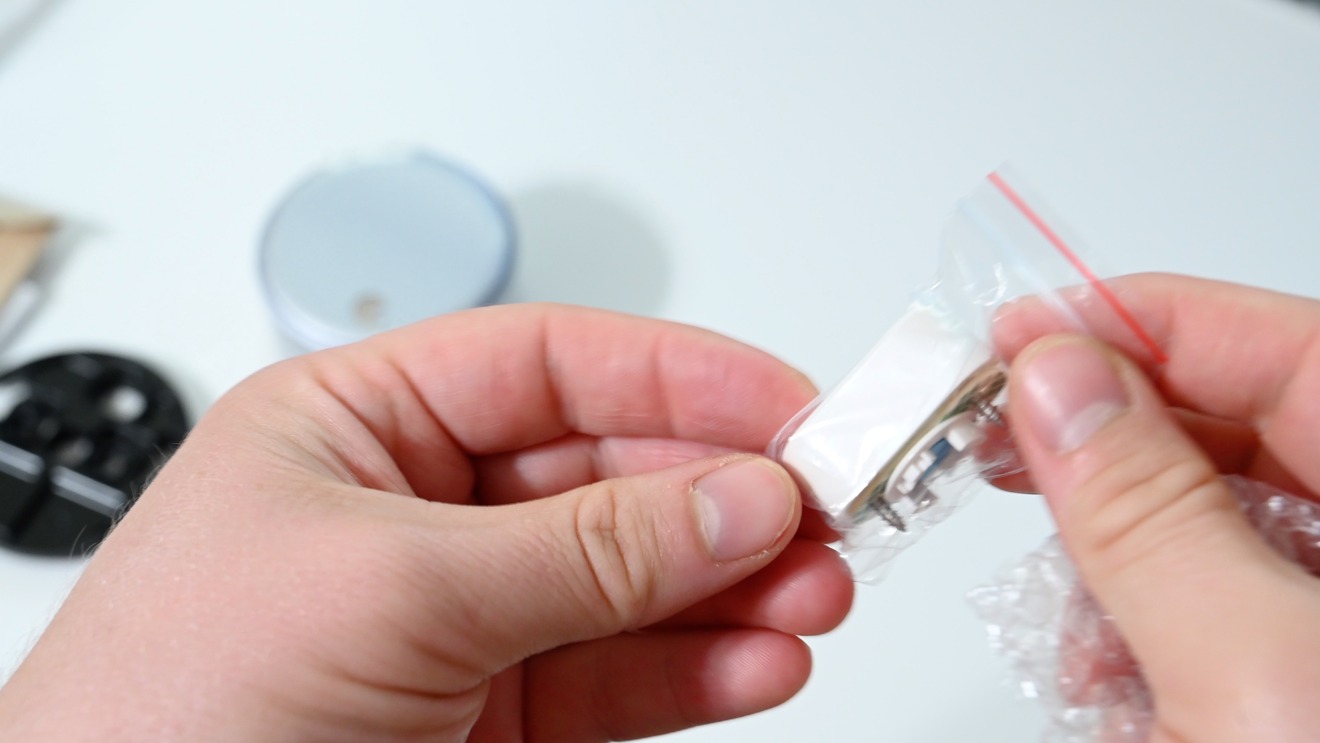 The only part that took a little more work was installing the DoorSense sensor. This small contact sensor will be able to alert you if the door is open or even left slightly ajar.

It can mount on the outside of the door in most cases, but for us, it wouldn’t fit due to the door being so recessed behind the frame. This meant we had to mount it in the door frame which involved drilling a hole to house it.

On a basic level, the lock can operate the same as any deadbolt where you manually throw the bolt closed, use a key, and so on. How it differs is that it can be controlled from your phone, from your Apple Watch, via Siri, and even Amazon Alexa and Google Assistant. 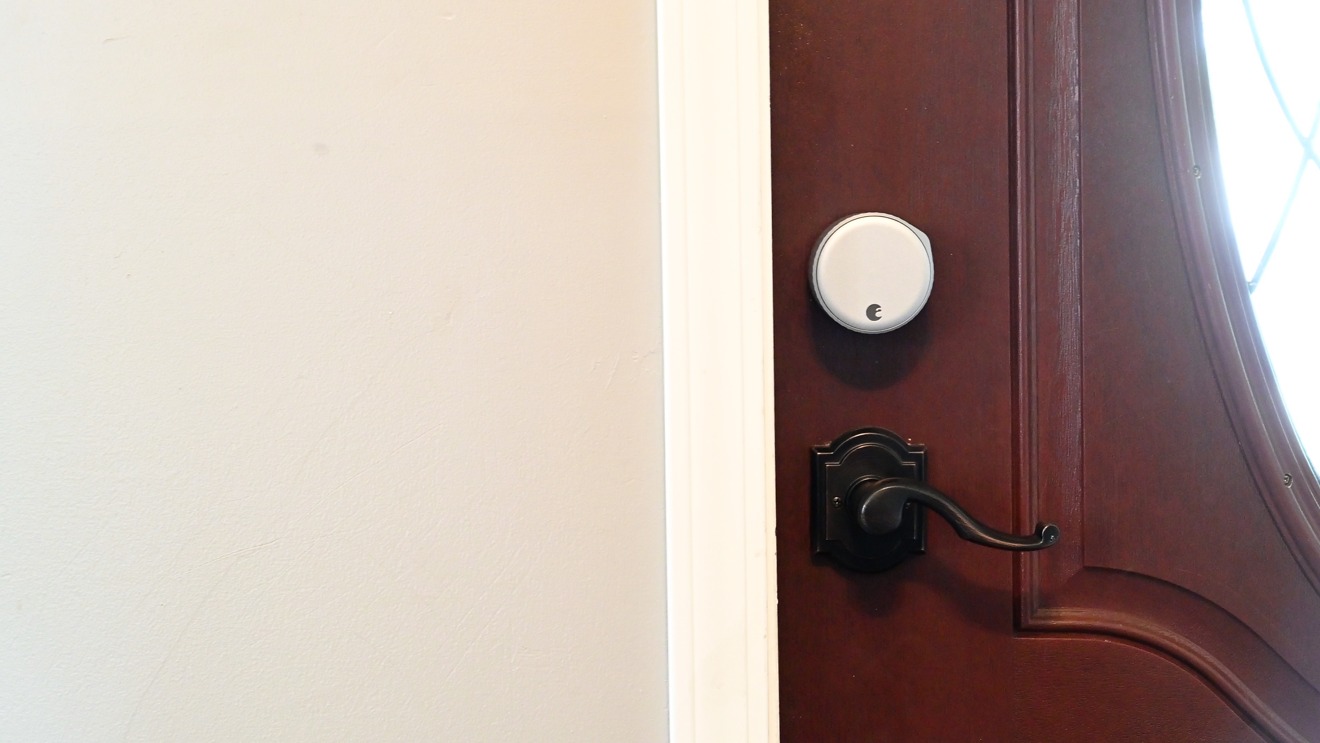 It is also possible to have the lock work on its own, automatically locking and unlocking as needed. Virtual keys can be shared with friends and family that can just as easily be revoked when necessary.

August adds a wealth of security features to your home as well as much convenience.

Rotating the lock feels much smoother than it has in the past. Previous models felt almost mechanical, while the new model feels fluid and smooth as it is turned. DoorSense also works great, preventing us from ever allowing the door to stay open.

Just as with prior generations of August, the new August Wi-Fi Smart Lock works perfectly well with HomeKit. A pairing code is kept right behind the faceplate of lock which makes it easily accessible but not in the way. 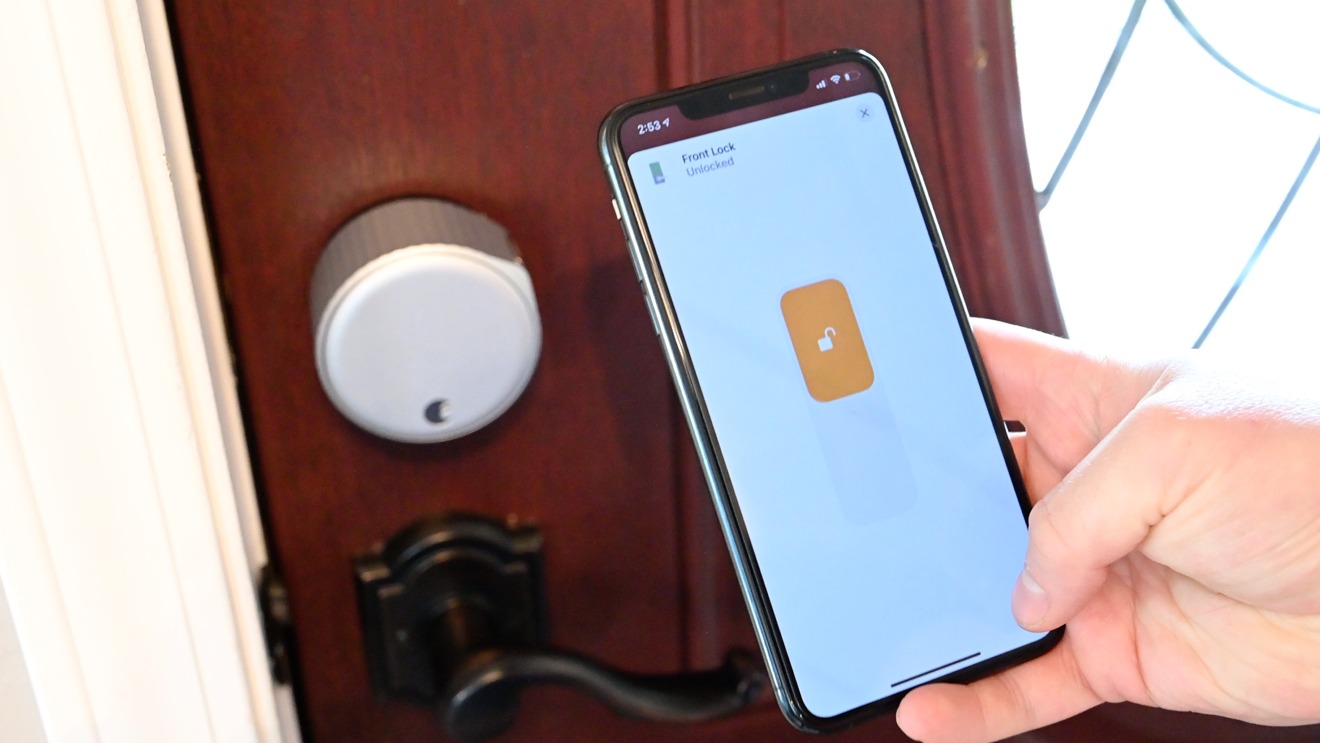 The August lock appearing in the Home app

Once scanned and added to the Home app, you can choose the icon that you prefer — such as the door handle option, give the lock a name, and assign it to a room.

Where it becomes very powerful is when it is combined with other HomeKit devices. For example, arriving home your door unlocks, the porch light turns on, and your interior lights turn on. When you leave, the door locks, the TV turns off, and your blinds close. 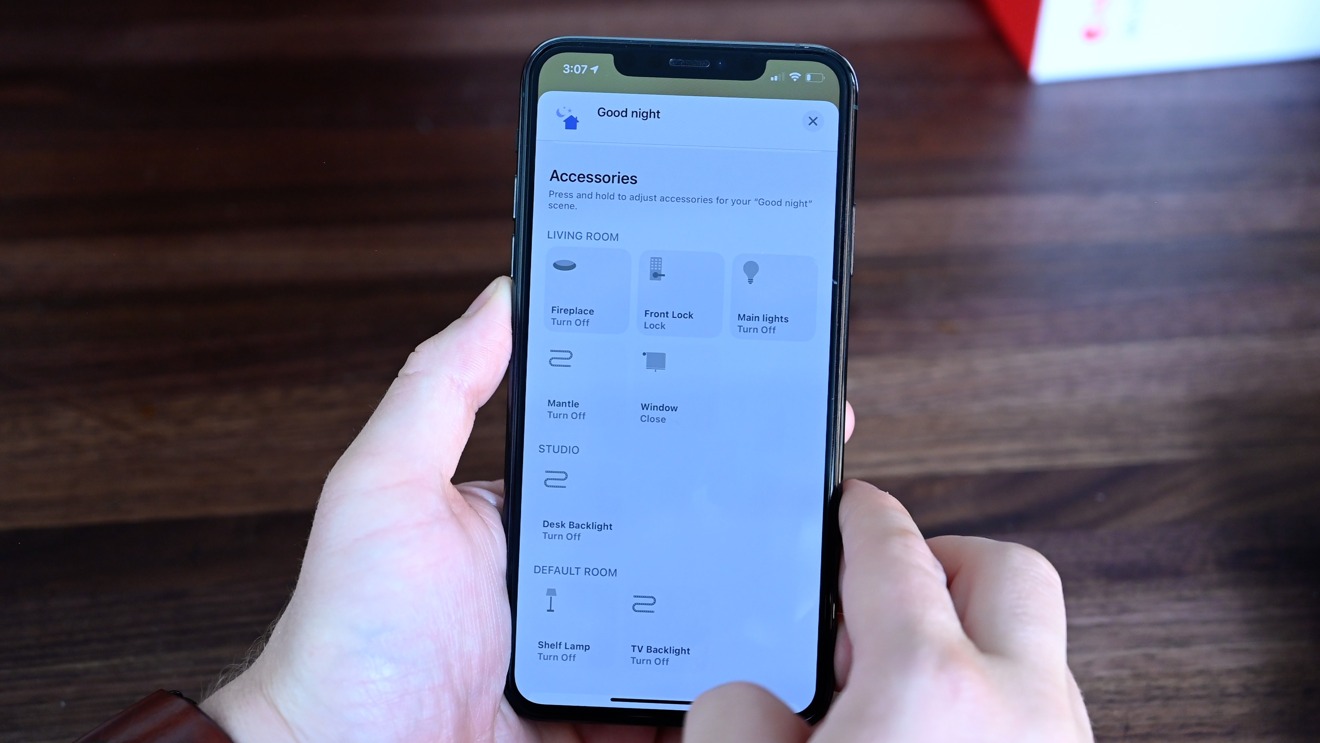 Goodnight scene with the Augus

Our favorite scene though is probably our goodnight scene, to make sure we always have our door locked before heading to bed. Routinely we tell Siri “goodnight” on our phone, Apple Watch, or HomePod, and a myriad of devices all start to engage.

Our garage door shuts, our August door lock locks, our shades roll down, the lights turn off, and the AC adjusts. It is smooth and is a perfect way to ready the house for the night. 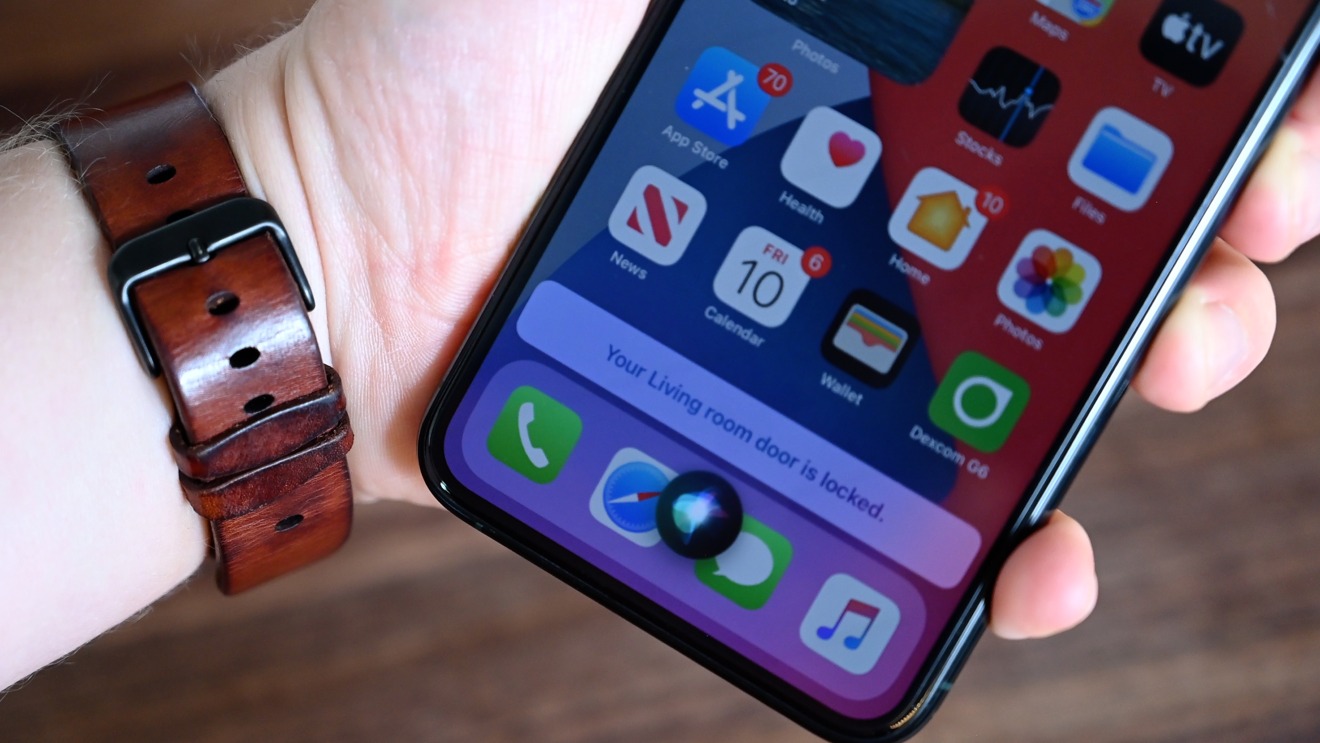 Siri checking the status of our front door

It is easy as well to check the status of the lock. You can look in the Home app but we just use Siri. If we are away or already turned in for the night, we can just ask Siri if the door is locked or unlocked.

In the August app, there are a ton of controls to configure that differ from what is available inside of HomeKit. HomeKit allows the August to lock and unlock as you leave and arrive, but it does so as part of a scene and requires user interaction.

It pops up on the Lock Screen asking if you would like to run your arrival scene or your “now leaving” scene.

In our experience, the August app is quicker and requires no user interaction to pull off. Whenever we arrive home, the lock automatically unlocks for us without having to do a thing.

We also like to use auto-lock which is the reverse, in that August will automatically lock itself after a set period. With HomeKit, we can receive notifications on the August so we get alerted as well when it locks or unlocks. 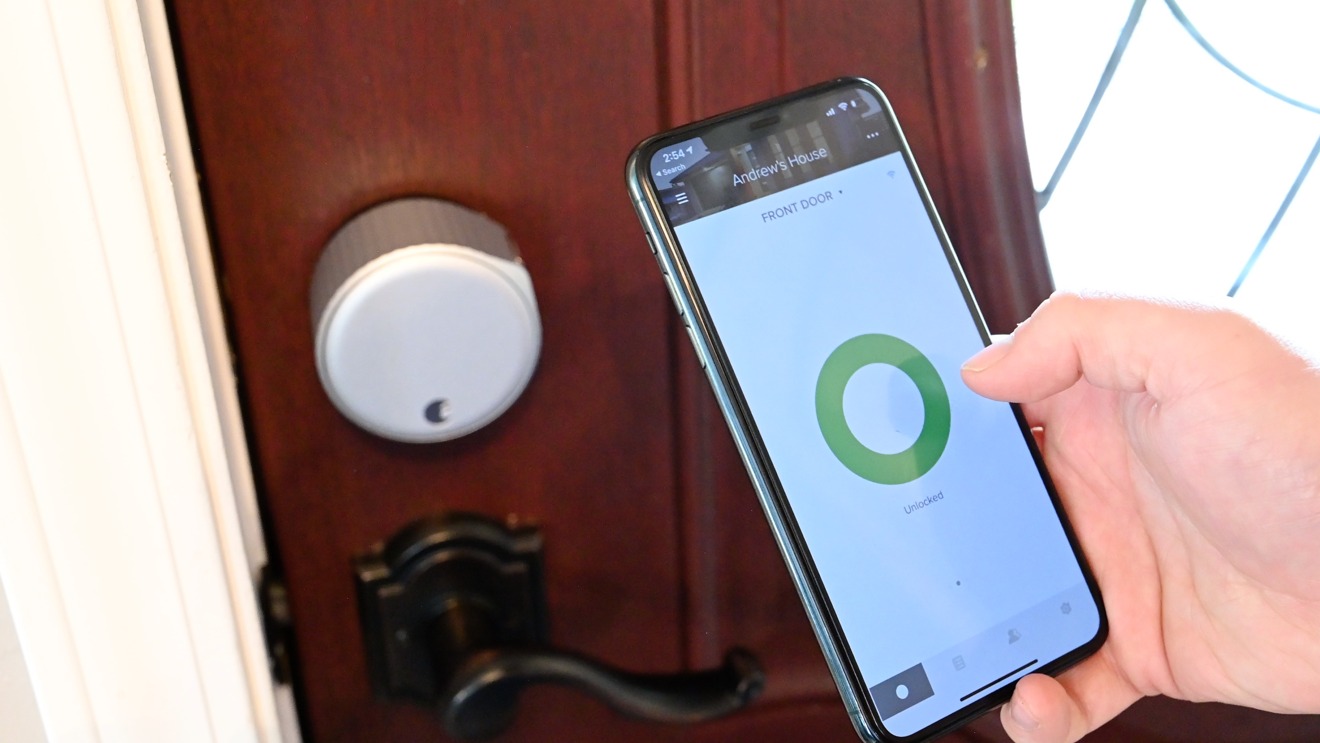 The August app also makes it easier to share access to the lock. You can send keys to anyone and they can have temporary or restricted access or full access. Smart alerts can be configured so you know when they lock or unlock the August too.

For more insight, there is the DoorSense module, a small magnet that alerts you when your door is left ajar. We do wish that what is basically just a contact sensor was exposed to HomeKit too, but alas not.

DoorSense has been a lifesaver for us in the past. We live near a busy road and are always concerned with our dogs escaping.

On occasion, our door isn’t closed all the way and our dogs have escaped before. DoorSense helps prevent this by alerting us to the door being left slightly open before a gust of wind takes it the rest of the way or the dogs figure it out.

The August Wi-Fi Smart Lock in the August app

Finally, the August app has a convenient timeline for the lock, showing anytime a user interacts with the August.

What we love about this app though is that when the lock is nearby, the Apple Watch connects directly to the lock rather than routing through the iPhone. This makes it faster and easier to use when your iPhone isn’t around.

There are likely many users out there who currently have a first-gen, second-gen, or Pro version of August and are wondering what is the real difference between this new version and theirs. 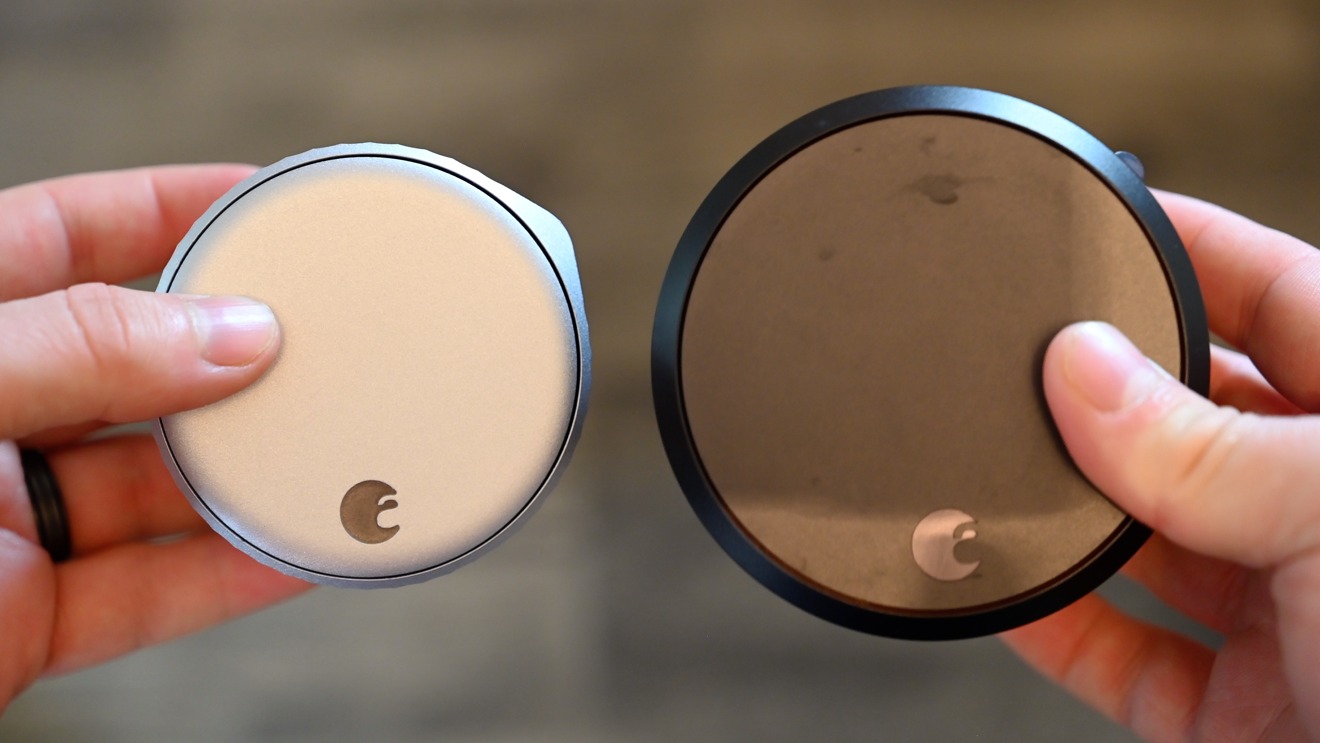 Take remote connectivity. For previous generations, if you wanted to access the August lock remotely from the August app, you needed the August Connect module. This was the bridge to connect the purely Bluetooth-based August to the internet.

As the name suggests, and as we’ve already touched on in this review, Wi-Fi is baked right into the smart lock itself. No Connect module is needed whatsoever, and this may or may not be a big deal for users.

If you are only relying on HomeKit and the August is near your Home Hub, then Wi-Fi isn’t crucial. The August will work and can even connect remotely all via HomeKit and the Home app, but if it is in a more far-reaching part of the house, or you do more control from the August app, Wi-Fi is key.

The second major change is the new form factor. It is now far smaller than the previous generation.

Should you buy the August Wi-Fi Smart Lock?

If you already have the August Smart Lock Pro, it is a tough sell to upgrade to the new August Wi-Fi Smart Lock. Functionality-wise, they are identical in what they offer.

It depends on how much you want to rid yourself of the Connect module or need that smaller form factor. If you have an older August, then the prospect becomes more enticing.

For those who have no smart lock and are looking to pick one up, the August is a phenomenal choice. Wi-Fi gives it connectivity from anywhere, the smaller size is welcomed and makes it more intuitive to use.

DoorSense is great to make sure your door isn’t left open, and the August app and Apple Watch app are reliable and feature-rich.

Not to mention HomeKit which is a must for any die-hard Apple user.

The August Wi-Fi Smart Lock normally retails for $249.99, but it is currently on sale at Amazon.

Take a Crash Course in Making & Teaching With Video This Weekend

What Is the Bougiest Status Symbol in Sofia Coppola’s New Movie? – Slate