Apple’s worldwide Mac shipments were up 5.1 percent during the second quarter of 2020, according to new PC shipping estimates shared this afternoon by Gartner.

Gartner’s Preliminary Worldwide PC Vendor Unit Shipment Estimates for 2Q20 (Thousands of Units)
Apple shipped an estimated 4.4 million Macs in Q2 2020, up from the 4.2 million shipped in Q2 2019, with shipments growing even amid the ongoing public health crisis.

Apple’s market share during the quarter grew to 6.7 percent, up from 6.6 percent in the year-ago quarter. Apple’s rising shipments came as the overall PC market saw growth of 2.8 percent. 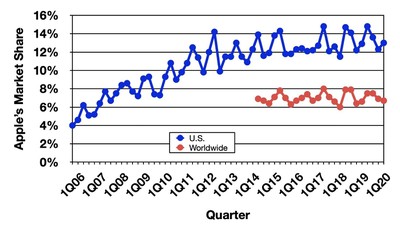 Apple’s Market Share Trend: 1Q06-2Q20 (Gartner)
Dell was the number three vendor 10.65 million PCs shipped and 16.4 percent market share, but Dell was the only one of the major vendors to see a drop in shipments. Acer shipped 4 million PCs and ASUS shipped 3.6 million PCs, with both vendors trailing Apple.

According to Gartner, PC shipment growth during the quarter was driven by purchases necessary for working from home and online education. The upward tick in shipments is not expected to continue.

“Additionally, mobile PC growth was particularly strong, driven by several factors including business continuity for remote working, online education and consumers’ entertainment needs. However, this uptick in mobile PC demand will not continue beyond 2020, as shipments were mainly boosted by short-term business needs due to the impact of the COVID-19 pandemic.”

IDC also released its own PC shipment estimates this afternoon, and its estimations are wildly different. IDC’s data suggests Apple shipped 5.6 million Macs during Q2 2020, up 36 percent from the 4.1 million estimated to have shipped in Q2 2019.

It’s important to note that data from Gartner and IDC is estimated and not reflective of Apple’s actual sales, which accounts for the large discrepancy in estimated shipments.

In the past, we were able to check estimated shipment data when Apple provided quarterly earnings releases with actual Mac sales information, but Apple no longer breaks out unit sales for iPhone, iPad, and Mac, which makes it impossible to know precise sales numbers.

Larry Ellison, Satya Nadella, and Trump, the power trio of tech deals, are getting the band together again